BOOTLEG SWEET features a line-up who have all performed in other internationally recognised bands such as The Glitter Band, Wishbone Ash and Christie, but all share a love of the music by Glam legends SWEET. Their high energy show features all of SWEET’S greatest hit’s including Blockbuster, Ballroom Blitz, Teenage Rampage, Funny Funny, Love Is Like Oxygen, Fox On The Run, Hellraiser, Lies In Your Eyes, Alexander Graham Bell, Co-Co, Poppa Joe, The Sixteens, Turn It Down, Wig Wam bam and much more!

BOOTLEG SWEET have been touring consistently across Europe since 1997, firstly as BC SWEET, and latterly as BOOTLEG SWEET, performing in the UK at the top UK festivals and Seventies events.

QUO’D are a tribute band to the fantastic Status Quo ‘Frantic Four’ line up of Lancaster, Rossi, Parfitt and Coghlan and six key albums from the 70’s namely, Piledriver, Hello, Quo, On the Level, Blue for You &Rockin’ All Over the World (although not exclusively!). A fans favourite,  QUO’Dreceive plaudits wherever they play for their on-stage energy and their dedication to reproducing the original sound of early Quo.

Local band THE HYPE took the 2021 Slade Convention by storm with their high energy set of Seventies classics, and make a very welcome return to the NAC. Also back by popular demand are PANDEMONIUM, another local band who played a fantastic set of high energy Seventies tracks at the 2021 Slade Fans Convention that had the whole room bopping! This is Day 1 of the Wolverhampton Seventies Weekend, which continues on Saturday 8th October with The Slade Fans Convention featuring two of the best SLADE tribute bands in the world, along with other live bands, poetry, and much more. All are welcome, day tickets available from ticketsource.co.uk

For 2022 we bring you not only one headliner, but two headliners!

Headlining the afternoon session with be the awesome SLADEST! These guys are the real deal, if you want to hear a band who faithfully reproduce the distinctive SLADE sound – including a frontman who sounds more like Noddy than Noddy – these guys will blow you away.

Headlining the evening session will be the only all-female SLADE tribute band in the world, the phenomenal SLADY! SLADY packed the NAC to the rafters in 2021 and then took the roof off with their high energy performance of the SLADE classics, including a full version of SLADE ALIVE to celebrate its 50thAnniversary.All members are seasoned, experienced musicians in their own right, lead vocalist Dani (Gobby Holder) has an incredibly powerful voice that will definitely impress!

Also making a welcome return is THE ORIGINAL WANTED. Having played a short set at the 2019 Convention and then retuned to play a full hour for the 2021 event, these guys simply have to make another appearance! Great energy and enthusiasm, this is the way live music should be played!

This will be an action-packed day of wall-to-wall SLADE, with other artists still to be confirmed, acoustic sessions, poetry, quizzes, competitions, videos and much celebration of the music of The Black Country’s Finest. This is Day 2 of the Wolverhampton Seventies Weekend, tickets are available for Day 1 onFriday7th October which features SWEET and STATUS QUO tribute acts, as well as local legends THE HYPE and PANDEMONIUM. 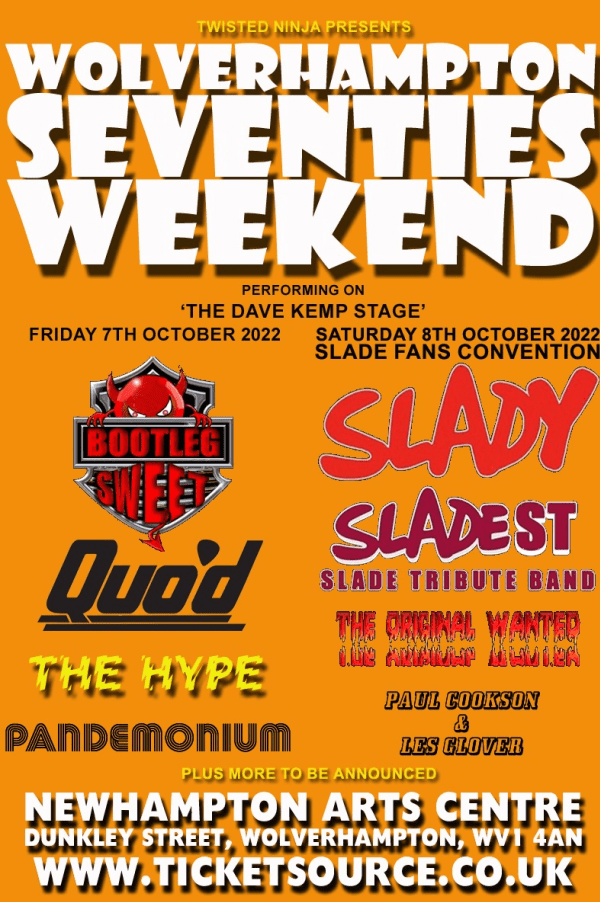