Lindsay Pritchard is a mixed media artist based in Studio 109 whose main focus is both urban and rural landscape and the dichotomy between the two.

She exhibits her work, sells through a number of galleries, takes personal commissions and runs a variety of workshops in both her studio and the wider community. She also works as artist in residence within a number of local schools and colleges. 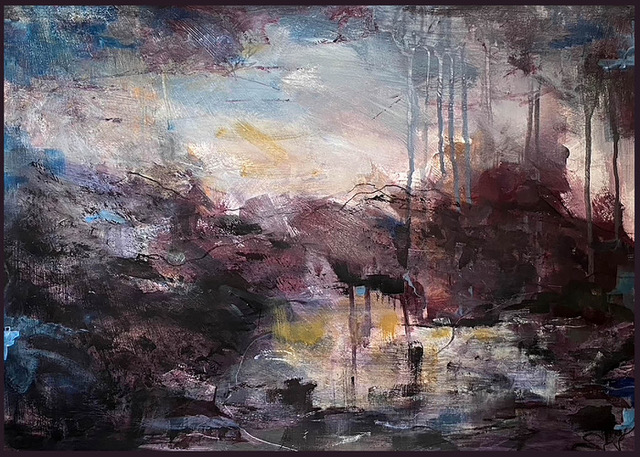 Born in 1971, Lindsay has been drawing and painting since a child. At 16 she entered the financial services sector where she continued to work for the next 20 years but always kept her love of art and never missed an opportunity to be creative. In 2007 she left banking to follow this passion and entered Wolverhampton University to study Illustration from where she graduated in 2010 with a BA(Hons) Illustration closely followed in 2012 with MA Illustration (Merit).

Since graduating Lindsay has been busy working in the creative industries running workshops, exhibiting her work, selling through a number of galleries and taking commissions. Mainly working in pen and watercolour, she likes to experiment with different painting surfaces and recently introduced mixed media into her paintings. The main focus of her work is the urban environment with a particular interest in dereliction and decay and loves nothing more than to spend a day sketching on location at derelict factories and junk yards. She also enjoys contrasting modern day architecture with historical neighbouring buildings or the natural environment and can often be found sketching out in the urban landscape of her local area. Most recently Lindsay has also been focusing native creatures that inhabit our urban environment with us.

Lindsay recently appeared as one of eight shortlisted artists on Sky Arts Landscape Artist of the Year 2017 filmed at Knaresborough Castle in June 2017 and broadcast on Sky Arts October 2017.

She is also a committee member of the Wolverhampton Society of Artists working within the society, exhibiting in their exhibitions and organising their annual Open studios event.

Lindsay also works as a guest blogger for Derwent Pencils testing and reviewing their products.